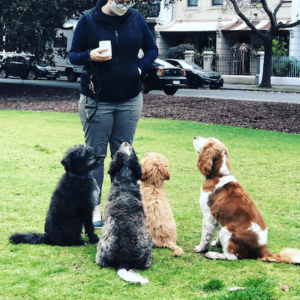 A constant for me in this 2020 Melbourne lockdown lifestyle has been my daily walks with my husband and my chocolate roan cocker spaniel called Rolo. Although I hold deep affection for my husband, I have been reflecting more and more about the joy that the doggo seems to so effortlessly bring about in our home. In pre-covid life, walking the dog was hubby’s task while I opted for early morning sports and school runs with the child. This has been the unquestioned pattern of the last ten years. With child’s chosen sport now out of the question since March, I’ve come to enjoy the benefits of a leisurely neighbourhood stroll through various dog parks and gotten to know some of the local larrikins.

It is commonly heard said in the part of Melbourne where I live that if you believe in reincarnation, you would choose to come back as a Pup of this Port. They are some of the most loved, walked, spoiled best groomed pups ever to be seen. We all know their names, we know their personalities and what’s more, we make a massive fuss of all of them. (And yes, we kinda judge and scorn those who don’t ‘get’ dogs).

Take Maple, for example, Maple is a 60kg Bernese Mountain Dog. She is still not one year old but is fully grown. Maple thinks she’s a much smaller dog than she is which is evidenced by what we call ‘the full body Maple’ which includes a bound towards humans she likes and an extraverted, full body fall against said-person’s body. This has resulted in more than one person being accidentally knocked over, which Maple always finds surprising but also delightful and is keen to reward with a fulsome face lick. Her body moves the way the human Dragon moves during Chinese New Year Festivities: the back part of her body moves in a different direction to the front part and her head, ears and tongue have lives and character of their own.

Then there is Charlie who is a seven-month-old caramel poodle cocker spaniel cross. In the UK, he would be a Cockerpoo, here in Australia he’s simply a Spoodle. Charlie loves every dog and every human and has a particular fondness for our dog Rolo. Sadly, the affection is not shared, at best it’s tolerated, but usually with a few growls to ensure Charlie knows who’s the alpha. However, the daily joy on Charlie’s little fluffy face when he sees Rolo is enough to melt the hardest of ISO hearts. Like one of my favourite scenes from the movie Love Actually, I could blissfully watch airport reunions for hours. I would most likely be bawling my eyes out, but there is something about seeing the grandchild bury themselves into Nonna, or the reunited lovers in a full body embrace that makes me feel that all is well with the world. And so it is with Charlie’s daily puppy run of joy towards our grumpy boy Rolo. (Charlie also has a highly amusing but slightly less endearing habit that involves what he likes to eat at the parklands if he owner doesn’t stop him first …).

Then there is Romeo who is a black terrier – I don’t know quite what kind, but let’s just say he looks like Hairy McClary and leave it at that. Romeo by name but not by nature. Romeo is one of the park’s most popular dogs but Romeo himself is actually quite aloof. He is not really sure why he receives so much unwanted attention from many of the other doggos in the park. In fact, he has been known to lead his owner away from the park to avoid the advances of amorous bitches.

Which leads us to Scarlet. Scarlet is a welsh springer spaniel and is really rather beautiful to behold with her liver-red and white coat, glorious wig-like spaniel ears and swishy white tail. She is around eight years old and has loved Romeo since they were puppies together. Scarlet is the gentle lady of the park who knows her own mind, likes to lead her owner past the doors of people that she knows and loves, (who feed her treats – including bacon), and only becomes especially animated when her spaniel nose sniffs Romeo in the air. Sadly, their once blossoming puppy relationship has now become an unrequited version of the famous love affair between the Muppet’s Miss Piggy and Kermit, despite daily attempts from Ms Scarlet to reignite it.

In the last month, I’ve also started to learn the names of the pups’ owners. Despite having chatted almost daily since March, the focus of our energies and attentions have of course been the dogs and their daily habits in the park and at home that have amused and entertained us. Dogly antics on Zoom meetings, snoring dogs as we try to quietly work, dogs taking extra liberties on beds and couches, dogs generally loving that more of their humans are home with them. So much furry funniness to talk about each day. The 34th President of the United States, Dwight D. Eisenhower once mused, “Why does watching a dog be a dog fill one with happiness?” and while I can certainly think of more than a few possible answers to that question, I’d also prefer instead to consider that ‘it is just so’, and how lucky are we to have these bringers-of-joy.

Here’s to our dear dogs, the unsung sanity saving heroes of covid lockdown!

If you would like to work with Positive Impact, get in touch with Angelina.